Based in the Garhwal hills, Mussoorie is a picturesque hill station in the northern part of the country. Also named as the Queen of Hills, this particular hill station has a captivating view that engages people from every sphere of life visiting the place round the year. Be it the foreign nationals or the people of the country, Mussoorie remains a favorite tourist destination for all. 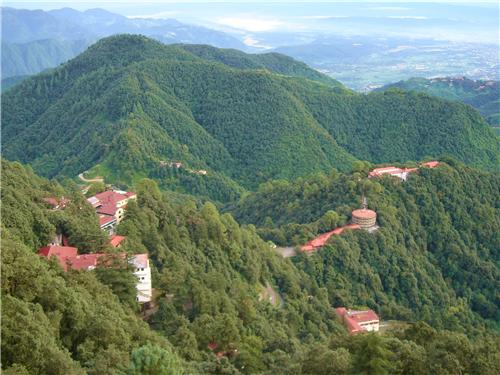 Especially when the northern plains are burning with scorching heat it the cool climate of the beautiful Mussoorie that provides a relaxing solace to both mind and body. Situated at an altitude of 6600 feet or nearly 2000 meters this is an integral part of Dehradun district in Uttarakhand state. The main attraction of this charming hill station, apart from brilliant climatic conditions is the availability of multiple sightseeing spots which includes religious venues, scenic beauty as well as fun and entertainment areas.

The geographical location of Mussoorie falls at 30.45°N 78.08°E. Stretching over an area of 64.25 kms this picturesque hill station remains bounded by the snowy peaks of the Shivalik Ranges on the southern side and the verdant Doon Valley on the north eastern side. Adjoining famous towns like Landour, Jharipani and Barlowganj are included in the geographical limits of Mussoorie and they are considered as a part of Greater Mussoorie.

The highest point of Mussoorie is the Lal Tibba Peak which is based at 7500 feet above the sea level and it is an excellent sightseeing destination.

Mussoorie is well connected with the capital of the country and it is based at a distance of only 290 kms from Delhi. Apart from this it also functions as a gateway to the Gangotri and Yamunotri shrines which are a preferred tourist location for many devotees. The climatic condition of Mussoorie remains pleasant almost throughout the year but it is the summer months which remains blessed with extremely good weather attracting huge number of visitors. The average rainfall of Mussoorie remains around 180 cms per year.

The forested area of the Garhwal Himalayas as well as the soil in and around Mussoorie has been attracting various ecologists and soil scientists from multiple locations of the world. Several studies have been conducted on the soil types of these regions. Rich in minerals, this soil in Mussoorie are fertile but it needs special farming techniques to have sufficient agricultural production. Potato is one of the chief products cultivated here. Apart from this there are various other products like wheat, basmati rice, paddy, sugarcane etc which are grown here.

Mussoorie does not have any prominent water bodies within its area but several lakes and waterfalls are present here which enriches the attraction of the place. Kempty Falls, Jharipani falls, Mussooorie Lake are such water bodies which help in providing the visitors entertainment through their scenic excellence and availability of various water sports.