Based in the Garhwal Himalayan region, Mussoorie is a charming pictorial town which was once most demanded and looked for destination by the British officers. For them it was a summer retreat and a perfect escapade from scorching heat and unbearable warmth of the summer months in northern part of the country. It is the brilliant climatic conditions, the astonishing flora and fauna, the verdant carpeted hilly surroundings and the mesmerizing view of the exotic mountains which altogether served a brilliant getaway for all.

Earlier it was known to only a few officers of the British troop. However, this was not for long as slowly with the word of mouth the popularity of the place grew double fold and it became a hub for social meeting and gatherings especially for the British families of privileged class. The British, who were the cream of the crop, liked the place more because Mussoorie was an ideal depiction of an English countryside location. It has the beauty of mountains, the scenic excellence of greenery and soothing ambience which altogether was the best package for the Englishmen who were at that time living in India. 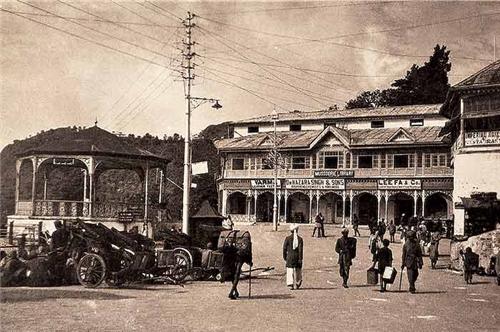 Mussoorie has not changed in years after but the popularity of the place has only increased among domestic as well as foreign visitors, who wish to spend some quality time on this hill station with friends and family.

While visiting the hill station and roaming through several sightseeing spots, one may come across several creations and belongings of the bygone era which reflect the existence of British rule in the country and their behavior then.

The history of Mussoorie goes way back to the period when Gurkhas were known to be the rulers of the regions. It was in 1803 when Umar Singh Thapa and their gang of Gurkhas conquered and included Mussoorie in their region. They had huge plans for this territory but the plans of the Gurkha clan failed to get executed. The Gurkhas wanted British intervention to execute the plans under their leadership but negotiations with the British officers at that time turned out to be unsatisfactory. This, however, turned worse when the Gurkhas came into a direct battle with the Britishers on Novenber 1 1814. But the Gurkhas soon accepted their defeat and they were forced to evacuate Dehradun by the next year, 1815. It was in 1819 when East India Company became successful in capturing Saharanpur district of which Mussoorie was a part.

Mussoorie was a place which was often termed by the locals as Mansoori since the affluent production of the mansoor shrubs in and around the hill station. According to the tales, before the British it was almost a vacant land with only the shepherds, visiting with their flock of animals so that they could graze the mansoor shrubs from which the name of the place was derived.

The first interest of habitation in this location by the British was seen when the first house was erected in 1823, on Camel’s Back Road by Mr Shore, who was the Joint Magistrate then and Captain Young of Simur Rifles. But this was only the beginning as within months Captain Young built in a large house for himself here and named it “Mullingar” as the Commandant of Landour. Slowly as days passed the popularity of the place grew more and more among the Europeans and more and more officers decided to get themselves settled here. It was almost treated as a summer retreat by the Britishers. However, it was never treated with any official title like Shimla as Summer Capital but it was more unofficial and private destination, closer to heart.

By the closure of 1832, Mussoorie has turned into a preferred location for many visitors. Even government offices like office of “Survey of India” which was based in Dehradun, had proposals to be shifted to Mussoorie for its excellent environment.

Several attempts were made by the Surveyor General of India to conclude the shifting but somehow the plan failed to execute. By 1900, Mussoorie was altogether a different and quite changed place as compared to mid eighteenth century. Not only in terms of visitors but the growth of population on the hill station and the growth and development of the area has been quite distinctive. Lot of positive developments and progressive work was seen at that time. Especially during the summer months the town used to remain crowded with huge number of visitors and bundle of social activities took place in this region.

Some popular activities held here at those times were Polo games, horse riding, hunting, ball games and board games. The British officers also preferred to conduct social parties and gatherings here. The neighboring place Landour was at that time a convalescent center for the English soldiers. However, it was during the British rule only, that Landour was adjoined with Mussoorie as a part of greater Mussoorie. Slowly Mussoorie gained all facilities and it was soon turned into a place of entertainment and relaxation for the British elite class. However the difficult truth behind the rise of the hill station was the fact that it was a private retreat only for the premium class Englishmen and others were restricted to enter.

During the early 1900, when Mussoorie was seeing progress and developments around the hill station, it also witnessed the sad occurrence of racial discrimination by the British. The British behaved rudely with the fellow Indians residing there for years. Indian families were restricted from getting involved into any social events or entertainment zones for the reason of being Indians.

Popular signboards in several British establishments read “Indians and Dogs are not allowed”. It was the Nehru family who protested against this ugly racism in Mussoorie and visited the hill station frequently irrespective of the fact that they were penalized with huge fines every time. It was towards the mid of 19th century that the hill station slowly gained more popularity and because of scenic brilliance and majestic beauty, the Duke and Duchess of Connaught decided to have their residence here.

Also to increase the visitor’s convenience rail head was extended till Dehradun so that coming to Mussoorie becomes easier and simpler. However, by the end of 19th century the place was filled with hotels and exclusive lodges and also a winery which was looked after by the McKinnon’s family.

The inclusion or amalgamation of Mussoorie to Uttarakhand took place in 1959. During that year only Dalai Lama after escaping from Tibet, established in exile Tibetan Government in Mussoorie which later shifted to Dharamshala in Himachal Pradesh. The first Tibetan school was established in Mussoorie in 1960. The place was so secure and habitable that more and more Tibetans moved to Mussoorie, concluding with the fact that today more than 5000 Tibetans resides in Mussoorie.

Independence has been the most positive factor for the hill station. Development and growth has made the town more habitable with almost all facilities available. Academic sectors, business prospects, electricity, water and every other necessity have been solved well by the government. The town has utilized their assets and involved them in growth of tourism business here. Today hundreds of hotels along with related business houses are running well here.