Mussoorie referred as The Queen of Hills is situated in the Garhwal region, at the foothills of Himalayas of Uttarakhand. The state itself is referred by many religious believers as The Land of Gods, because of the existence of several popular and holy shrines across several part of the state.

Though Mussoorie is majorly known for its scenic excellence and as a hill station, but there are popular temples in this hill station too which pull in several devotees and tourists throughout the year. The best part of the religious places in Mussoorie is the fact that it not only houses quite popular Hindu temples but there remains the existence of the age-old pious churches, Jain temples and Tibetan Buddhist temples too. These temples are not only places of worship but it also provides a glimpse of the history of Mussoorie and their existence. 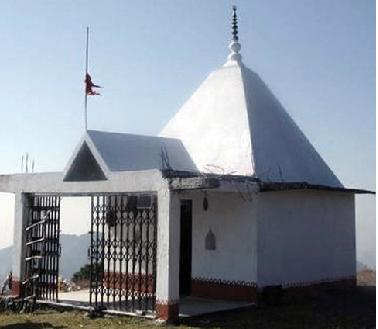 Jwalaji Temple or Jwala Devi Temple is situated in the western part of Mussoorie atop the Benog Hills near Benog Wild Life Sanctuary. At a distance of 9 kms from Mussoorie and at an elevation 2104 metres this temple provides a scenic beauty unparallel to any other destinations. Adorned with the divinity of Hindu Goddess Durga, the temple remains surrounded with thick jungle of pine and deodar trees with a heavenly view of the Himalayas from the hill top. On one side there is the majestic view of Shivalik range while on the other it’s the lush greenery of the Yamuna valley.
The best time to visit the temple is during the sunset hours when the scenic beauty remains at its best. The temple, however, remains open each day of the week between 5am to 4pm. Photography is allowed here which is an advantage for the onlookers.

Another beautiful shrine of the Hindu God of Snakes is the Nag Devta Temple located on the Cart Mackenzie road of Mussoorie. Built in by a British major, this temple is believed to be constructed in 1838. Being an ancient temple of the locality, this remains a popular shrine among the locals as well as the tourist visitors round the year. The festival of Nag Panchami is celebrated in a big way in this temple, attracting many visitors. Apart from the holiness of the temple, the location remains bestowed with pictorial beauty which is also a view not to be missed.

The temple is best visited during the day time since the timings of the temple is only between 7am to 5pm. Photography is allowed and there is exclusive locker facility available to keep belongings.

Based at an altitude of 2757 metres and situated at a distance of almost 34 kms from The Mall Road Mussoorie, this is a beautiful temple, 1 km trek from the village Kaddukhal. This can be organized as a day trip from Mussoorie since the distance can be covered in an hour and enough transportation like buses and private taxis are available to reach here. This is a temple with lot of mythological importance as believed by the devotees. According to the Hindu priests, it is believed that Sati was devoted to Lord Shiva and wanted him as her husband which was not accepted by her father King Daksha. He deliberately insulted Lord Shiva which was not accepted by Sati and she sacrificed her life and this brought anger and grief in Lord Shiva.

To control the situation Lord Vishnu destroyed Sati’s body into pieces and each parts fell away, so that Lord Shiva does not find any physical parts to grieve on. It is believed that the head of Sati fell at this place where Surkanda Devi Temple is based.

The temple is surrounded by dense forest with a magnificent view of the Himalayan range. The temple timings remain from 7am till 5pm.

Located in the Happy Valley near the IAS Academy Mussoorie, the Tibetan Buddhist Temple is also called as the Shedup Choepelling temple. Built in by the Tibetan clan based here in Mussoorie, this is a temple with huge historical importance.

Dalai Lama is known to take refuge in Mussoorie after fleeing from the bindings of Chinese authorities based in Tibet. It is the Tibetan Buddhist Temple which portrays the struggle of the Tibetan people as well as the rich culture of them. There are idols of Buddha meditation hall, prayer wheels, carvings portraying several stories of the Tibetans on the walls and ceiling. It is a beautiful place with an ideal location to find solace of body and mind. The timings of the temple remain from 7am to 5pm.

Believed to be the oldest one in the Himalayan range, The Christ Church was constructed in 1836. It was the British officers residing in this location and those who used to visit frequently managed to join hands in constructing the church as their place of worship. The Church became all the more popular when it was visited by the Princess of Wales in 1906, who was pleased with Gothic design of the church with exclusive architectural brilliance on the walls. She planted a deodar tree in the courtyard while her visit which still remains before the church as a memorial of the event. The Church has stained glass windows and high altar which carefully describes the life story of Jesus Christ and also reflects the suffering of the Great Spirit.

The Church poses a beautiful atmosphere and a heavenly feeling which is bound to provide solace to heart. For every visitor, it is a must visit place. The timings of the church for all days remains from 7am to 5pm except for Sundays when it remains open from 8am to 5pm.

Built in 1839, St Paul’s Church is an Anglican Church based in Landour which is considered as a part of Greater Mussoorie. This church was the effect of the initiative taken by Bishop Daniel Wilson of Calcutta since at that time Landour did not have any church. Between the period of 1840 to 1947, the church was maintained by military chaplains and was majorly used by the British inhabitants of Landour. The Church is basically located near Char Dukan in Landour.

Apart from this there are Jain temples in Mussoorie which are quite prominent among its clan in the area. Shri Digambar Jain Panchayati Mandir and Mandir Dharamshala is located near Landour Bazaar which is approximately 2km from the Mall Road.

A Sikh shrine, Gurudwara Shri Guru Singh Sahib also lightens the hill station with its presence for its fellow followers here and for all those visiting. The Gurudwara is based in Landour Bazaar close to the Mall Road and has lodging facilities for the visitors.

Apart from the one mentioned there are other temples and Churches like the Parkasheshwar temple, Old Union Church, Kellogg Memorial Church too in Mussoorie which can be visited by the devoted tourists.

Explore more about Tourism in Mussoorie