Mussoorie is one of the prominent tourist destinations situated in Uttarakhand which is termed as the "Land of Gods". Referred as the “Queen of Hills”, in this land, Mussoorie has the most exotic serene, panoramic view, photogenic environment, harmonious ambience and last but not the least captivating sightseeing locations which pull in tourist almost round the year but especially during the summer months of April to June. Discovered by a British, this place was almost restricted for Indians and belonged as a summer retreat for the British officers. But with the Indian Freedom Movement, the place got its due recognition and today it serves as the most popular tourist destination in the country.

Mussoorie has many sightseeing spots but below mentioned are some of the popular tourist attractions in the hill station. 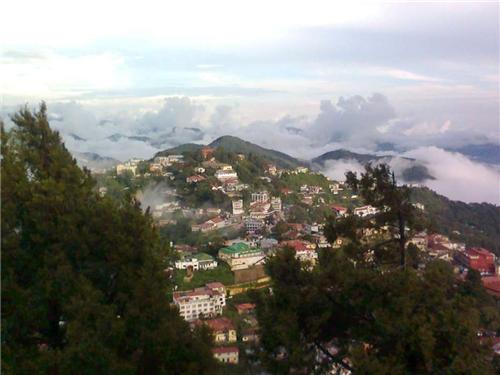 One of the prominent and most visited tourist spot in Mussoorie is the Gun Hill. This is the second highest peak in Mussoorie with an elevation of 400 feet above the Mall Road. The location has huge historical importance dating back to the time of pre-Independence period.

According to the locals, during the British rule there was a huge canon placed here at the hill top and it was fired every afternoon at the same time to make people aware of the time and let them get the opportunity to adjust their watches according. This in turn helped in scheduling other activities of the day. However, now there is only the water reservoir of Mussoorie but due to the history of the place and the scenic excellence from the hill top this has become one of the popular sightseeing spot.

Apart from the scenic beauty one can also spend quality time here amidst the scenic extravaganza since there is availability of food of beverages on the top of the hill. There are photographers available here too who provide the visitors with quick snaps to keep a memory of the place at negligible cost. Several games are conducted here like magic games or bottle shooting games which are pretty much entertaining for the kids and teens.

The ladies can enjoy photo shoot in Garhwali dresses which are also available here on rent.There is also a telescope which helps the visitors take a look of the surroundings and watch glimpses of Badrinath, Kedarnath and Pindari glaciers and others in the best way possible and enjoy the ambience.

There are two ways of reaching the Gun Hill, one is by trekking from Mall Road which can be pretty exciting with the photogenic environment encircling the path to the tourist spot, whereas the other by traveling to the location with the help of cable car available from Mall Road to the hill top. The cable car charges around Rs 75 per person and the ride is not more than 5-7 minutes, but the thrilling experience it provides in those few minutes atop the snow capped mountains with the sun rays falling on the hill tops, is simply the best.

Camel’s Back Road in Mussoorie 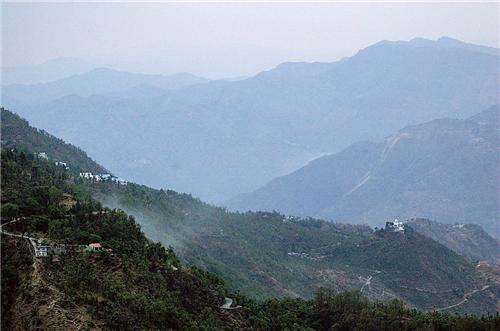 The ideal description for this beautiful tourist location would be a trail through nature’s lap. It is a 3km long stretch that connects two major locations of the hill station starting from Library Point and leading to Kulri Bazaar. The unique factor of this road is its unusual shape of a camel’s hump which also remains the reason behind its name.

The most attracting feature of this road is its pleasant ambience and picturesque view which provides huge solace and peace of mind. A walk through this road amidst the beautiful scenery is itself a rejuvenating experience especially during the sunrise and sunset times. Surrounded by snow capped mountains, clear sky and lush greenery at the base; this is an example of exotic beauty. Especially away from the crowded Mall road this is a harmonious journey.

The best way to visit Camel’s Back Road is by walking but for others there is an option of rickshaw ride with a fare of Rs200 per cart for a round trip. These rickshaw pullers are the locals and that is why they are able to provide a lot of information about the place and can be an excellent guide.

According to the locals, the British behavior towards the natives at that time was not at all friendly, the reason why the natives were restricted to enter the Camel’s Back Road during the pre-Independence time. However, after Independence a lot has changed and the locals got the freedom to move in their own land. The view through binoculars and telescope are some of the best in this region.

Cloud End is one of the extreme points of Mussoorie hill lying at the far western side of the Library Point. It is situated at a distance of 8km from the Library and it is one of the best viewing sites of the hill station. The bungalow here was built in by a British major in 1838. It was one of the first four bungalows built in Mussoorie having a breathtaking view of the Gigantic Himalayas and the sacred Yamuna River amidst a peaceful and calm ambience. An ideal romantic location for the young couples and the honeymoon goers has made this place quite popular. An echo point, a restaurant and a small museum here enriches the beauty of the place.

The road to this location, however, is under repair and it is difficult to travel with four wheelers here. One can trek to this location or avail local transport to reach the spot. It may be noted that Cloud End now houses an exclusive resort named as Cloud’s End. 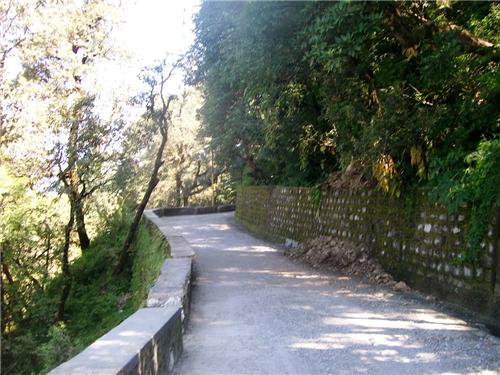 The highest point of Mussoorie, based in the Landour area, Lal Tibba, is a wonderful location for the best view of the colossal Himalayas and massive scenic beauty. Often referred as Depot Hill, this particular location houses the Indian Military camp and the office of All India Radio Broadcasting. It is a view point so the basic attraction here is the panoramic and photogenic view of the hill station. There is a Japanese telescope placed by the municipality on a tower point for better viewing pleasure of the tourist visitors.

The roads, however, to this location are not the best but the view from here of the hill station is simply awestrucking. It is advisable to take food and water since the availability of the same is much less here. Even one can carry binoculars of their own since the local ones are cheap ones and not the best.

Being one of the prominent locations of Mussoorie, this place is the heart of cosmopolitan activity in the hill station. Loaded with shops of various kinds and multiple restaurants this place is an excellent location to spend some quality time. Adorned with benches and lamppost, one can sit amidst the busy area and enjoy the buzzing town life of the hill station. One can find the previous age video game parlors and skating rings which are the premier attractions of The Mall Road.

One of the popular view points of Mussoorie, Children’s Lodge is one of the several peaks of the colossal Himalayan ranges which provide a grand view of the hill station and its exotic beauty. The glimmering snow peaks and the majestic Doon Valley combines to form an extraordinary view. The telescope present here provides an even better sightseeing option. At present Children Lodge is named as Nahata Estate since the area of around 300 acres is now owned by Harakh Chand Nahata and their family. The location can be easily reached from The Mall Road.

One of the most popular tourist locations in this hill station is Benog Wildlife Sanctuary. Established in 1993, this a part of the Rajaji National Park and this 11-km-long sanctuary is especially maintained for the pleasure of bird watching. Though multiple species of birds are available in this sanctuary, the main attractions are Red Billed Blue Magpie, Mountain Quail, Himalayan Peacock and White Capped Water Redstart. Apart from this, the sanctuary offers some of the best view of Himalayan ranges and extreme solace since the location of the spot is a little far from the heartland of Mussoorie. For the nature lovers it is an ultimate location to watch sunrise or sunset and enjoy the beauty of Mussoorie.

The Sanctuary is located around 6.8 miles away from the Library Point and it is a 2 km trek above the hill, from the famous Cloud End tourist spot. Walking from Library point uphill can be a tiring journey and it can take a time of more than 4hrs, so the best way is to go to Hathipaon Road, and take a ride so that a round trip can be concluded by 3-4 hours time. The best time to visit the Sanctuary is the summer time though the place remains open throughout the year. Photography is allowed here so one can have the best shots. 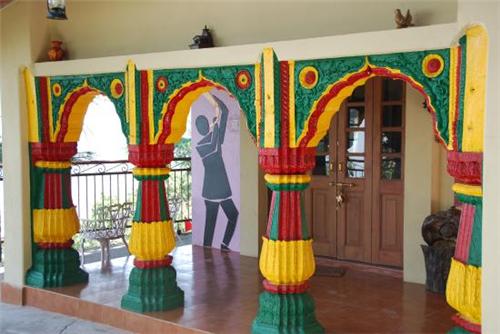 One of the newest attractions of Mussoorie and a must-visit destination is the Soham Heritage and Art Centre, which is considered as “One of its Kind” in Mussoorie as well as in the whole state of Uttarakhand. It is a center of perfect blending in a sublime way of art and spirituality. The place promotes art and culture and their development works and provides a perfect insight of the Himalayan culture. It has paintings, handicrafts, rocks, handmade sculptures and many such things which detail story behind them which held every tourist captive. There are Hindu temples as well as Buddha temples which are also extremely attractive. Needless to mention the scenic beauty from here is also captivating. The positive attribute of this museum is the fact that it has something for the interest of every kind of people, be it young or old, and engaged with different professions or a learner. It has interesting aspects for all.

The distance to Soham Heritage and Art Centre is merely 3 kms from the Gandhi Chowk in Mussoorie and about a km from the famous Picture Palace. The same can be visited with the help of local transport at much cheap rates.

Apart from the famous tourist spots one can also visit the temples in Mussoorie or the famous picnic spots which are equally beautiful and entertaining, In a nutshell, Mussoorie is a place with many sightseeing spots and entertainment options. It is one of the best holiday spots in Northern India.


Explore more about Tourism in Mussoorie